What a beautiful day.

Today was such a beautiful day outside. During the winter months we don't often get blessed with such wonderful weather. It was the perfect day for sledding which is what most of our children did today on our hill in the adventure playground. We had Brayden and Essey sharing a sled. It was so great to see them sharing. Brayden would try so hard to pull Essey up the hill in the sled but would ask for help half way up. Then they would get pushed down and laugh together the whole way down and then start the process all over again.

We also had Jacob and Caleb pulling each other in a sled or at least trying to pull each other. Jacob really wanted to be pulled in a sled so he asked Caleb. And Caleb said yes and tried very hard to pull Jacob but kept slipping and letting go of the rope. After a few minutes of this Jacob got up and asked Caleb if he would like a ride and Caleb said yes. Jacob did pull Caleb around for a bit then got bored and went to play on the hill.
We also had some children who took Ms. Penner to the "beach" where they could no longer get hit by the sled coming down the hill. Elise drove the jet ski with Ms. Penner and Xander to the beach. Once there Elise went swimming in the water and was very careful of sharks and other dangerous water creatures. While Elise was swimming Xander took a turn driving all around and drove them right back to the daycare for lunch.
While the others were sleeping we had some children in the wake up room who were using their fine motor skills to build a house out of blocks. The structure had a roof, four walls and even a chimney. After some decision they decided to add a door and a garage. They we both very excited to show off their house that they worked so hard on. 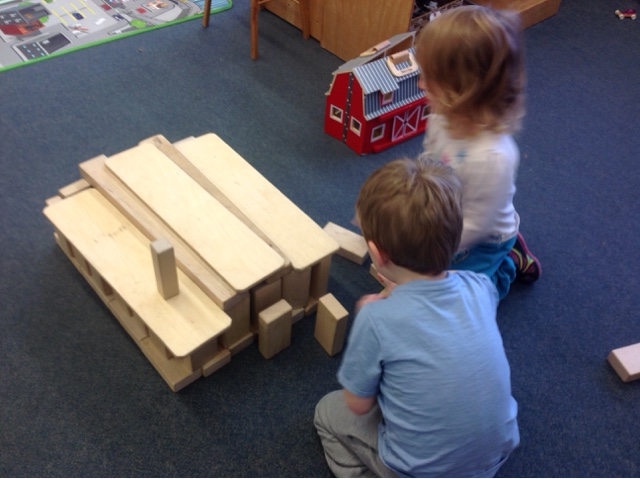